The Teeth of 25 Dinosaurs and Other Prehistoric Creatures

Dinosaur fossils have been discovered on all seven continents, shedding some light on the prehistoric world. Many fossils have contained varying forms of teeth, from sharp, serrated front teeth to grip and pull flesh to complex dental batteries designed to strip and grind plant material. Check out our chart on the teeth from 25 dinosaurs and other prehistoric creatures. 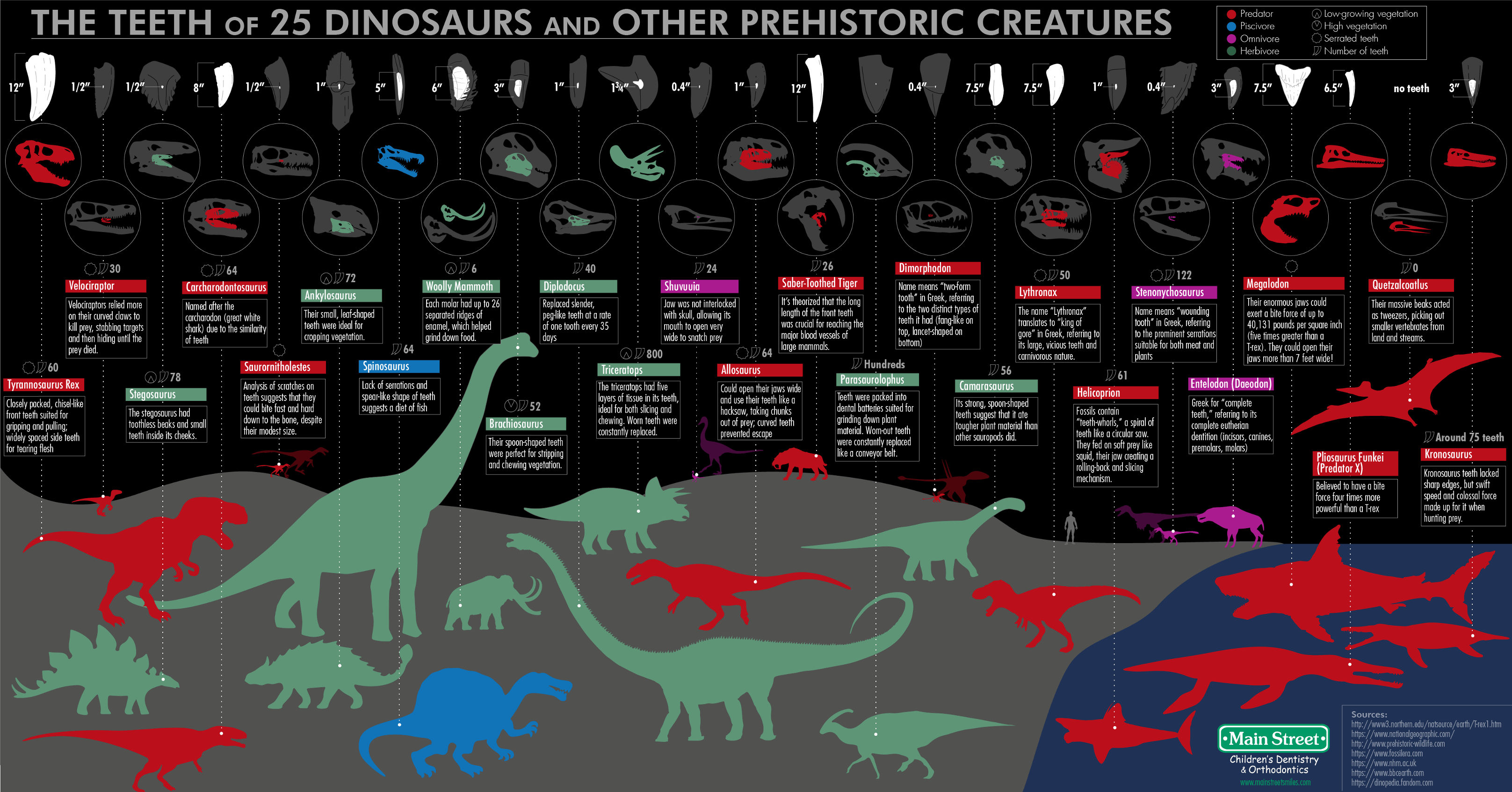 Embed this infographic on your website by copying & pasting the code below:

What Dinosaur Had the Largest Teeth?

The legendary Tyrannosaurus rex holds the record for the longest tooth at 12 inches. T. rex had 50 to 60 thick, conical, and serrated teeth that were replaced after being broken. Due to their colossal size, T. rex teeth were reinforced and tightly knit to prevent breakage because the replacement process took about 2 years. Some scientists theorize that Tyrannosaurus rex was primarily a scavenger, but a recent discovery of a T. rex tooth lodged between the tail vertebrae of a herbivorous duck-billed hadrosaur proved that they hunted prey. The hadrosaur’s tail healed and the bone regenerated around the lodged tooth, suggesting that it had been attacked but managed to escape alive.

What Prehistoric Creature Had the Greatest Bite Force?

Tyrannosaurus rex had the most powerful bite of any terrestrial animal. To determine the bite force of the T. rex, paleontologists constructed a three-dimensional digital model of the skull using anatomical research on birds and crocodiles. The results using this model were staggering, reaching a maximum bite force of almost 12,800 pounds, about as much as an adult T. rex’s body weight (or 13 grand pianos). However, the sea-dwelling terror known as C. megalodon puts the T. rex to shame with a bite force of an estimated 41,000 pounds, taking the crown for the greatest bite force of any known creature. It could open its jaws 7 feet tall and 6 feet wide, chomping down on prey like dolphins, sperm whales, and other sharks.

Here are some other fascinating facts about dinosaur teeth:

Categories
What Our Patients Say About Us

“I love this Dental office. My daughters both got braces and needed teeth extracted. All the staff were so kind and compassionate with us. They really helped ease my daughters worries. The office is beautiful and is very child friendly.”

“I love this Dental office. My daughters both got braces and needed teeth extracted. All the staff were so kind and compassionate with us. They really helped ease my daughters worries. The office is beautiful and is very child friendly.”